Communications at the U.S. Treasury and Commerce Departments were reportedly compromised by a supply chain attack on SolarWinds, a security vendor that helps the federal government and a range of Fortune 500 companies monitor the health of their IT networks. Given the breadth of the company’s customer base, experts say the incident may be just the first of many such disclosures. 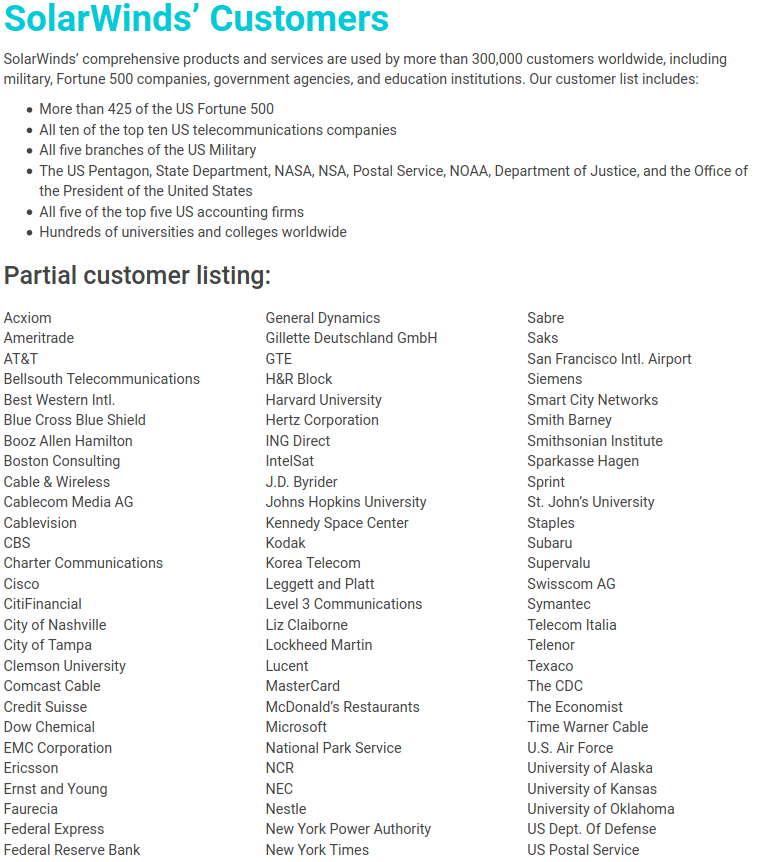 Some of SolarWinds’ customers. Source: solarwinds.com

According to a Reuters story, hackers believed to be working for Russia have been monitoring internal email traffic at the U.S. Treasury and Commerce departments. Reuters reports the attackers were able to surreptitiously tamper with updates released by SolarWinds for its Orion platform, a suite of network management tools.

In response to the intrusions at Treasury and Commerce, the Department of Homeland Security’s Cybersecurity and Infrastructure Security Agency (CISA) took the unusual step of issuing an emergency directive ordering all federal agencies to immediately disconnect the affected Orion products from their networks.

“Treat all hosts monitored by the SolarWinds Orion monitoring software as compromised by threat actors and assume that further persistence mechanisms have been deployed,” CISA advised.

A blog post by Microsoft says the attackers were able to add malicious code to software updates provided by SolarWinds for Orion users. “This results in the attacker gaining a foothold in the network, which the attacker can use to gain elevated credentials,” Microsoft wrote.

From there, the attackers would be able to forge single sign-on tokens that impersonate any of the organization’s existing users and accounts, including highly privileged accounts on the network.

“Using highly privileged accounts acquired through the technique above or other means, attackers may add their own credentials to existing application service principals, enabling them to call APIs with the permission assigned to that application,” Microsoft explained.

Malicious code added to an Orion software update may have gone undetected by antivirus software and other security tools on host systems thanks in part to guidance from SolarWinds itself. In this support advisory, SolarWinds says its products may not work properly unless their file directories are exempted from antivirus scans and group policy object restrictions.

The Reuters story quotes several anonymous sources saying the intrusions at the Commerce and Treasury departments could be just the tip of the iceberg. That seems like a fair bet.

SolarWinds says it has over 300,000 customers including:

-more than 425 of the U.S. Fortune 500
-all ten of the top ten US telecommunications companies
-all five branches of the U.S. military
-all five of the top five U.S. accounting firms
-the Pentagon
-the State Department
-the National Security Agency
-the Department of Justice
-The White House.

It’s unclear how many of the customers listed on SolarWinds’ website are users of the affected Orion products. But Reuters reports the supply chain attack on SolarWinds is connected to a broad campaign that also involved the recently disclosed hack at FireEye, wherein hackers gained access to a slew of proprietary tools the company uses to help customers find security weaknesses in their computers and networks.

The compromises at the U.S. federal agencies are thought to date back to earlier this summer, and are being blamed on hackers working for the Russian government.

In its own advisory, FireEye said multiple updates poisoned with a malicious backdoor program were digitally signed with a SolarWinds certificate from March through May 2020, and posted to the SolarWindws update website.

FireEye posits the impact of the hack on SolarWinds is widespread, affecting public and private organizations around the world.

“The victims have included government, consulting, technology, telecom and extractive entities in North America, Europe, Asia and the Middle East,” the company’s analysts wrote. “We anticipate there are additional victims in other countries and verticals.”

Update, 8:30 p.m. ET: An earlier version of this story incorrectly stated that FireEye attributed the SolarWinds attack to APT29. That information has been removed from the story. 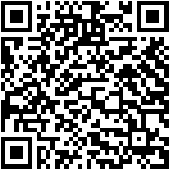